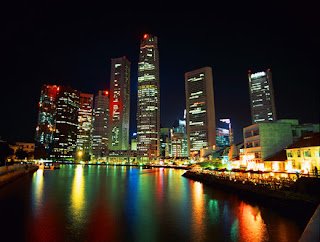 As some of you may know, I spent last week working in Singapore. I have to say, when I decided to move to Africa, I didn't expect my job to take me through an entirely different continent. Three months in, and I may have to reassess the name of this blog and start calling it Google's Man in Transit. But that's the subject for another blog post. For now, I want to highlight a few observations I had in Singapore, another truly fascinating place.

Unlike most cities, Singapore is also a country in and of itself. It's like the city-state model of old. Inhabiting an island off the coast of Malaysia, Singapore is a profoundly unusual place. The city is clean, organized, and extremely safe. I noted to one of my colleagues that it feels like the way one might imagine a futuristic city would be portrayed in a movie: the buildings are tall, but it never feels claustrophobic; the city center is devoid of poverty, and the public transit system is eerily efficient. As a former British colony and current commercial hub, virtually every inhabitant speaks English, and as a modern-day melting pot, it's as Asian or as Western as you want it to be

What makes Singapore really interesting though, is the way the society/government functions. It's what some people might call city planning and regulation that works, and what others might call overreaching paternalism and government interference. The first thing many visitors hear about Singapore is the government's unusual stance on chewing gum. No one is ever quite sure whether gum is legal for personal use or whether it's just importing with the intent to distribute that's illegal, but one thing that you most certainly hear on arrival is that spitting gum on the sidewalk is an offense punishable by caning. Yes, caning. In actuality, gum is only legal for "therapeutic" purposes, and the whole caning thing is a widely propagated urban legend, but it is indicative of the government's policies at large. Some true facts about Singapore: drug possession (marijuana and cocaine, specifically) carry a penalty of death, the posted fine for eating on the metro is S$500, roughly $375 USD, and vandalism (not gum spitting) is indeed a canable offense.

The government is largely autocratic and yet there is remarkably little corruption, an interesting contrast to some other countries I can think of. The government is also hugely paternalistic in its regulation of "morally hazardous" behaviors. For example, there's only one casino in Singapore; entrance with a foreign passport is free, but Singaporeans have to pay S$100 to get in. The justification I heard is that it generates revenue for the state, but the government doesn't want its own people engaging in such questionable activities... just foreigners. Kind of makes sense, and yet something about it also feels deeply wrong. Nonetheless, I thoroughly enjoyed my time there; I would love to make a trip back one day to continue to explore its many eccentricities. And with this job, who knows, that day may be sooner rather than later.


Sign up for email updates.
Posted by Unknown at 12:51 AM

So glad you had this experience. i'm sure you left them a little bit better off, too.

It's a "government that works" because it puts the policeman inside the head of the citizen. It's a (not so subtle) dystopian dictatorship.