It's Official: We're Living in the Future

A few days ago, while an old friend was visiting NY, I made the trek up to the Upper East Side to visit him at his brother's place. It was wonderful to meet his family, especially his very new little nephew. I don't see very many babies these days, so seeing how the little guy interacted with his grandmother made me remark to myself, "Wow, we're really living in the future." When I was growing up, cell phones didn't exist, and email was a largely unused technology. If a family member lived a long distance away, you got to see them a few times a year. The only middle ground was an expensive long distance phone call. 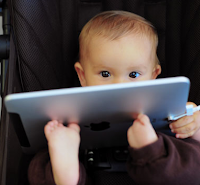 What made me do a double take with my friend's family was that this baby and his grandmother were actually separated by thousands of miles, communicating over FaceTime on an iPad. Growing up in the first generation of digital natives, I've gradually become accustomed to video as a pretty standard mode of communication, but seeing this little baby and his grandmother communicate seamlessly through a computer the size of a legal pad blew my mind. How far we've come in such a short period of time, not just in the ways we can communicate, but it how easy and intuitive it's become that it seems 100% natural for a 11-month-old baby to be able to do it without any coaching. It was incredible to see how quickly the baby got it, touching the screen with his hand where his grandmother had put hers. In 23 years, when that kid is my age, how will we be communicating then?

Just the next day, I was scheduled to catch up over tea with my good friend, Mike, who works for GoogleX. It had been over a year since we'd seen each other, and since then Mike has transitioned into working on Google Glass, a revolutionary advancement in wearable computing. Google Glass is a piece of hardware that rests on your head almost like a pair of glasses except it has a small screen just above your normal line of sight on the right. It runs a simple, paired down version operating system and works in a way that I can only describe as magic. I'm not sure how much I can say about the experience of using it, but for the second time in two days, I found myself remarking with awe, "So this is the future."

As Mike and I were leaving the cafe, we stumbled upon living-in-the-future occurrence #3: the MakerBot Store in Soho. For those of you unfamiliar, MakerBots are the first generation of affordable 3D printers. "What does that mean?" you ask? 3D printers are devices that can print out plastic copies of custom-created objects. You can "print out" doll houses, model cars, Christmas ornaments, and even jewelry. One of the cooler features they had at the store was an apparatus to make 3D models of people's heads and print them out on the spot. Needless to say we got ours done. My nose got a little bit chopped off, but it was still very cool to have it all done in under 10 minutes. Not that long ago, it would have taken months to accurately model a 3D object and reproduce it. Now you can do it while you're on your way to dinner uptown. Pretty incredible.

The last occurrence that I'll point out was just the icing on the cake. As we finally left the MakerBot store, we were both rushing to catch the subway uptown, and as I was walking, I caught sight of this out of the corner of my eye: a person interacting with a giant touch screen computer inhabiting what  was once a pay phone. New York City is not known for its cutting-edge infrastructure, so this surprised even me. Apparently they're popping up all over the city. Who would have guessed it? Apparently we are living in the future. 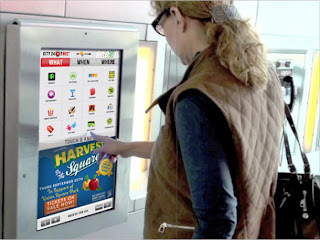