It's been a few weeks since I've been back from Burning Man, and after recounting the experience to many of you, it seemed about time to put my thoughts down for posterity. In short, Burning Man was incredible. When people ask me if it met or exceeded my expectations, I reply "Burning Man was a superset of my expectations." I'd heard so much about the experience from friends and from the media that I thought I knew more or less what I was getting myself into before I got there. Man, was I wrong.


For me at least – everyone experiences it differently – Burning Man exists on at least three levels of meaning. The first is the one you hear about most often in the media: Burning Man is a giant playground for grownups. Yes, to a large extent, it's 75,000 people out in the dessert partaking in hedonistic delights and living largely without laws. If you want it, it's there: music, sex, drugs, food, and booze, though also yoga, meditation classes, and lectures. If you want it, it's there. But if that's all you take away from Burning Man, you've missed out.

Burning Man is also a vision of a post-apocalyptic utopia. Burning Man takes place in black rock dessert on a dried out lake bed. As a result, the terrain is serene and otherworldly. Instead of sand, the ground is mostly flat and firm with small pockets area covered in fine-grained dust particles. There's also no power grid or infrastructure for lights, so all of the structures and all of the people are lit up themselves. Imagine this: the sun has fallen for the night, and you look out into the expanse and see nothing besides art, and makeshift structures, and people lit up in neon LED lights. It truly feels like a different planet. Burning Man also turns all of our social norms on their heads, in a way that feels like it would only make sense at the end of the world. There are no taboos. You want to walk around naked? That's cool. Gay, straight, bisexual, polyamorous, non-gender conforming? No one minds. Want to dress in crazy clothes covered in fur and LED lights? Nice outfit! What's more, the social norms that do prevail are based on openness, generosity, and empathy. Everyone talks to each other. There's none of that weird "we're standing next to each other in line but can't make eye contact" nonsense. Everyone acknowledges everyone else as a human being worthy of love and affection. When you introduce yourself, you give the other person a warm, genuine hug. When you see someone in need, you stop to help, whether it's a person having an emotional moment or someone who looks like they need a bite to eat.

Burning Man is also profoundly disconnected from the outside world. Phones don't work there, so you say goodbye to the "default world" as Burners call it, and say goodbye to being able to make plans. This forces you to accept the present as it comes. There's an expression out there: "playa time". You do your best to make it to where you said you'd be, but everyone accepts that the playa (the colloquial name for the land) has the potential to throw a wrench in the best laid plans.

And then the final level, which proved to be the most meaningful for me: Burning Man is essentially a giant piece of participatory art that every Burner takes part in. More than a festival, it's a pop-up civilization that rises and falls in the span of two weeks. It has its own culture, its own sacred spaces, its own structures, and its own social norms. And everything is laden with symbolism. The obvious one is the Man, the center of the city and the most prominent symbol, which burns at the end of the week. Barring the periods of dust storms, where vision is occluded, the Man is always visible, a constant and pervasive symbol of humanity and of our transience on this Earth. 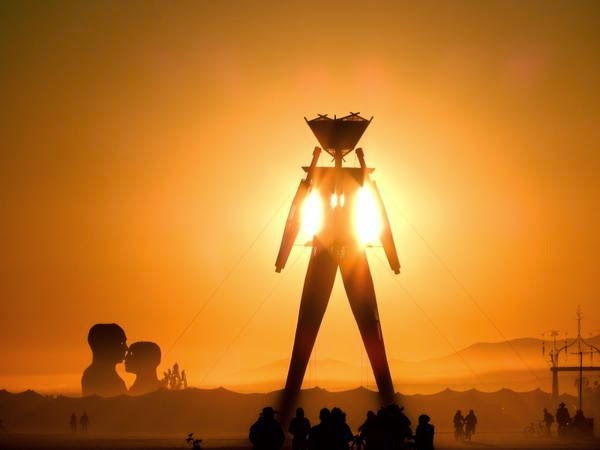 But it extends far beyond that. When I first heard about the structure called "the Temple", I thought it sounded pretty goofy. A temple constructed in a few days in the middle of the dessert. How could that really mean anything? But being there was a radically different experience. This building, which rises from the ground in a few days, becomes this profoundly sacred space for people, generally for those in grief. People go in; they write on the walls; they meditate, and they commune with their thoughts. On my first visit to the Temple, I saw people walking around, breaking into tears, and other random passersby stopping to embrace them. On my second visit, the day before it burned, the Temple was packed with people. There was one man sitting off to the side playing guitar and singing a melancholy song in Spanish. Just as I was taking this in, a mother and her two small daughters, maybe around 5 years old, walked up to the middle and put a few items down, a sign of mourning. This was more than I could handle, and I broke into tears, taking in the communal sense of loss around me. And at the end of the week, it burns in a giant moment of catharsis with thousands of people gathered round, completely silent. Just as we're ephemeral on this Earth, so are our monuments, religions, and cultures. 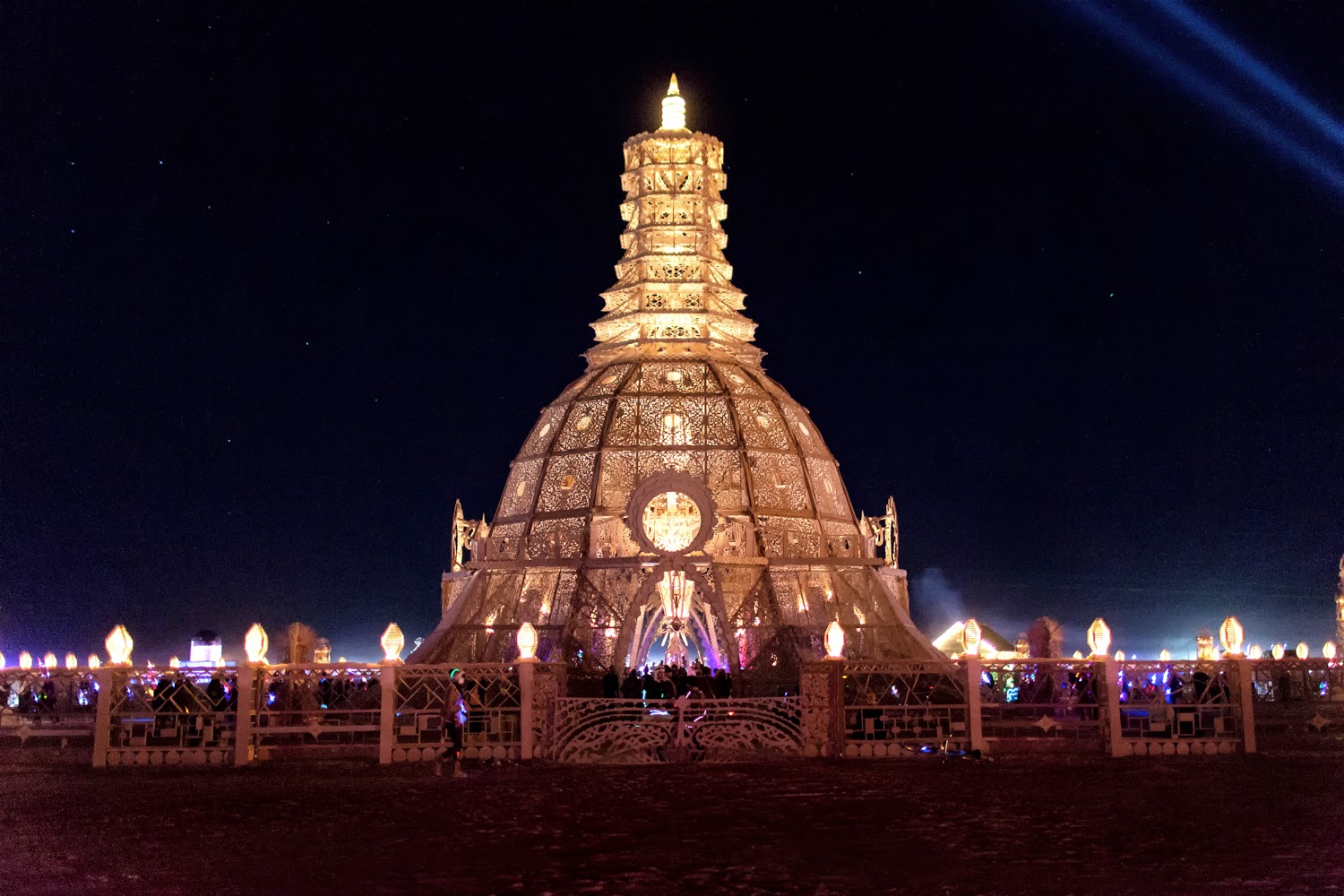 Even the nature of the city and the land speak to this metaphor. Black Rock City, home to 75,000 people for this one week, is laid out in a giant circular formation with the man in the middle and ring roads emanating outward. The rings are dubbed with letters, but the roads that cut across them are all named for times on the clock, a subtle reminder that the clock is ticking. The dust storms too, for that matter, remind you of the world's impermanence. Being caught in one of these "white outs", as they're called, is deeply surreal. One moment there's a bustling world around you as far as the eye can see, and the next moment, nothing. When the wind kicks up the dust particles, it creates a phenomenon where you can't see more than 10 feet in front of your face. One moment the world is there; the next it's gone. 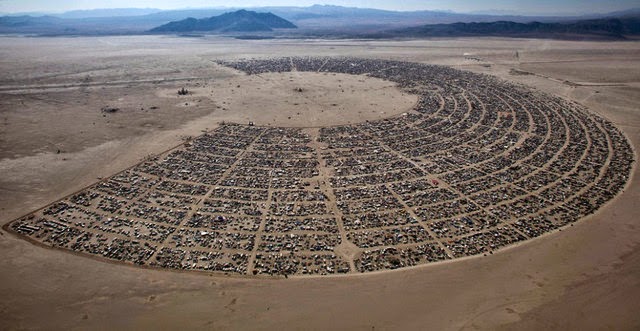 To me, this was the most profound version of Burning Man.

When you put all of this together with the hard conditions: the extreme heat during the day, the cold at night, and the constant noise, Burning Man cracks you open and makes you ponder the deep questions we're not even aware of in our daily lives.

So will I go again? If I can make it work, you better believe it. Burning Man pushed me mentally, physically, and emotionally. It wasn't an easy vacation, but damned if it wasn't worthwhile. Next time I'll just know I have to allot myself sufficient time to "decompress" and recuperate after its over.
Posted by Unknown at 4:55 PM