Landed in Lagos, the Heart of Nigeria 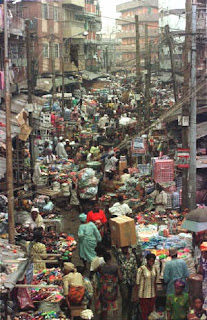 Today is day three in Lagos, and day two of a national holiday for the Muslim celebration of Eid al-Adha, the Festival of Sacrifice. As a result, I haven't seen too much, but I do have some initial observations about this city that garnered such polar reviews. But first, some background. With a population nearing 160-million, Nigeria is the most populous country in Africa and the eighth most populous country in the world. It's largest city, Lagos, alone has roughly one-third the population of all of Ghana. When I told people I was coming here, I got the full range of reactions, from "Oh Lagos is a real city; have fun!" to "Good luck buddy, see you in the next life." I was intrigued. How could one place evoke such different opinions? One thing I knew for sure was that in West Africa, Lagos is certainly a place whose reputation precedes itself.

Lagos (pronounced "LAY-gos") has a reputation for being extremely dangerous. Even Nigerians are deeply suspicious of other Nigerians. In the three days since I arrived, I haven't seen it yet, but I credit that to the fact that my only day out in the city consisted entirely of meetings and being shuttled around in an SUV; since then I haven't been foolish enough to leave my hotel. (Funny story though, when I landed on Sunday, I proceeded to walk out of the airport and discover that Google hadn't set up a driver to pick me up. The sun was beginning to set, and I couldn't get in touch with anyone from the company. I did my best not to panic, but this situation could have very easily turned out to be very bad. But back to my point...)

In the US, Nigeria is arguably best known for Internet scams, and that's certainly apparent and consistent on the ground. Internet scams, or 419 as they call it here, are extremely prevalent. Some Nigerians are concerned by this international reputation, but many believe that these scams help drive the local economy. Ironically, scammers here are called Yahoos ("Yahoo" is pidgin English for "scammer"), the same thing Yahoo employees call themselves.

Another interesting difference from Ghana is the culture of bling. Nigerians aspire to success, and then they really flaunt it. When I visited KNUST in Ghana, the students told me that you could recognize the Nigerians on campus based on their flashier attire. This observation turned out to be indicative of Nigerian culture at large. This cultural more may have something to do with the demographics of the country. The populace is incredibly young; the median age is just over 19, but life-expectancy is extremely low, at roughly 47. With figures like that, it's more understandable why people might spend so much on the present that they end up living without savings.

More observations on the culture and technological landscape as soon as I escape the confines of this hotel! Tomorrow will be an exciting day.


Sign up for email updates.
Posted by Unknown at 12:02 PM

You are highly welcome! Wish you a 9c stay here. Sure u wld enjoy every bit of it. Av a fulfilling and funfilled xperience